Local Epsom residents Carol and Steve Bridger today unveiled a new flagpole on Epsom Common, by Stamford Green, in memory of their son Richard who sadly passed away in 2018 aged just 34. Richard, who was their eldest son, had suffered with Duchenne Muscular Dystrophy but enjoyed visits to the common as well as looking from his window towards the green from his room.

The original wooden flag pole was snapped in half during a storm a year and a half ago. The flagpole was used not only for flying the environmental Green Flag award, which the common regularly wins, but also during Remembrance weekend and other special occasions.

Carol and Steve decided to donate a new flagpole to Epsom & Ewell Borough Council. Steve said “Richard loved this area so when we saw the damage pole we knew this would be a fitting memory of Richard”

He went on to say “Carol and I would like to thank Stewart Cocker of Epsom & Ewell Council, Epsom Common Association and Tom Kane of Kane Construction who supplied the labour and materials to replace the base for free”

2 thoughts on “Flagpole Donated in Memory of Son” 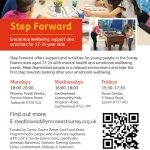 The Tiger Who Came To Tea

The Tiger Who Came To Tea

We use cookies on our website to give you the most relevant experience by remembering your preferences and repeat visits. By clicking “Accept”, you consent to the use of ALL the cookies.Cookie Settings
Do not sell my personal information.
Cookie SettingsAccept
Manage consent